Monday we ventured out to the Cosmo to sign up for their cards and get some points under our belts. While we have visited the Cosmo several times (Eggslut & Chandelier Bar) we’ve never actually given them any play so we decided to correct that. Not that we are huge players, but I figured we might as well. We ended up about 80 bucks for our trouble so I’m certainly not going to complain about that. 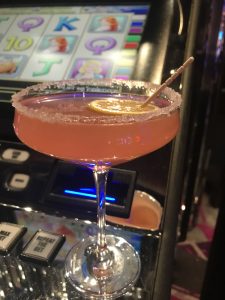 Once we were done there we walked over to Park MGM to check out the Hello Kitty pop up. I’m not sure why they show it located at the Park MGM as it is actually right out in front of NYNY, but whatever.

I wanted to take some pics for her and it was kind of cool for the novelty of it. Rob got a coffee and I got a macaroon cookie thingie. Nice, but not worth the seven dollars. 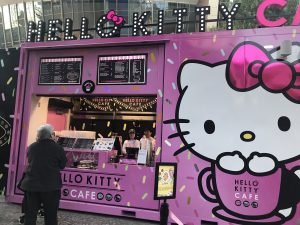 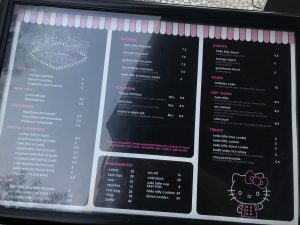 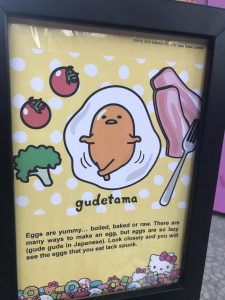 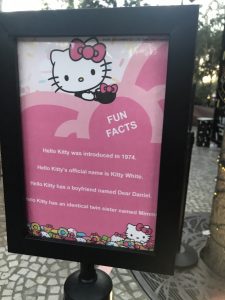 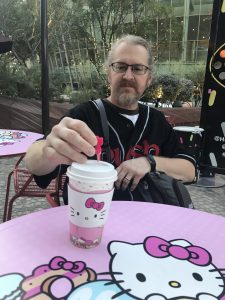 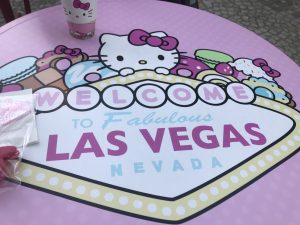 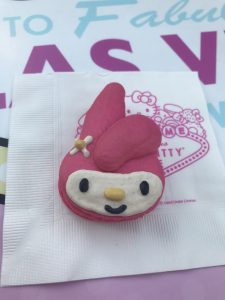 We sat around and chatted for a while. We had originally planned to hit the Hunger Games Exhibit at the MGM, but decided earlier in the day that I could not justify the cost of doing it for as little as it seems to show. I can’t see spending almost a hundred bucks for the two of us to go look at costumes and read about stuff I already know about just to play with some bow and arrows after. I’d rather spend that money elsewhere, so we bailed on it.

We did walk through the MGM to get the monorail back to Bally’s. By then my feet were pretty much toast. We had thought about walking over to Ellis Island for some BBQ but I decided against it.  We ended up getting Wahlburgers instead and ate it in the room. 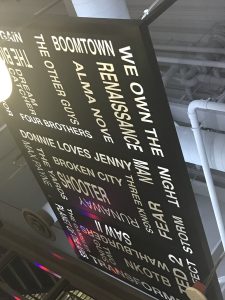 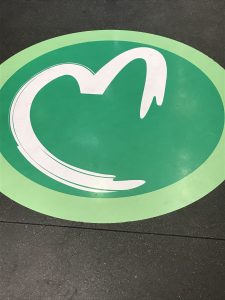 Slept in on Tuesday morning and then headed out around 12:30 to The Gordon Ramsey Pub and Grill at Caesar’s Palace. I’ve never had Beef Wellington and I only just learned that it was steak wrapped in a flaky pastry so I decided it was a MUST DO this trip. I have heard mixed reviews about it at GR properties, but I decided to do it because it was pretty much the only type of restaurant that we could use our celebration dinner at.

We decided that we needed to try the Beef Wellington and the Toffee Pudding for sure and we would see what else we might want from the menu. When we got there they had the “lunch special” that had both those items at $52.00 so we each got one. 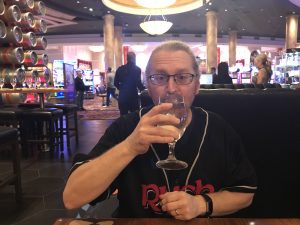 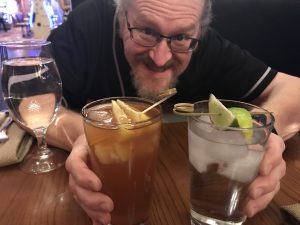 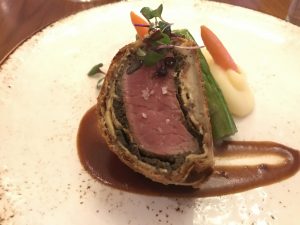 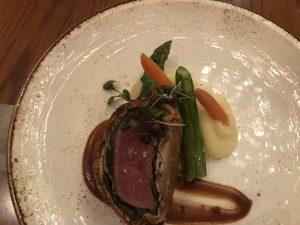 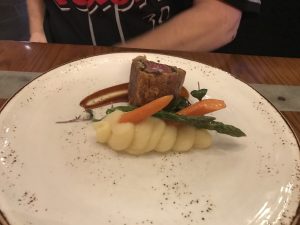 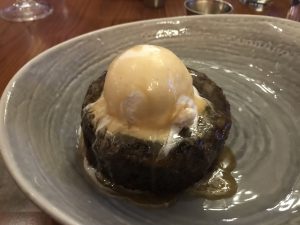 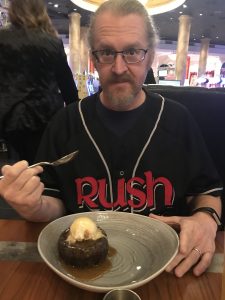 I have to say that I really enjoyed it a LOT. I have nothing to compare it to of course, but I found both to be amazing and was so glad that we went. The wait staff was really great and I have no complaints at all.

From there we walked (very slowly as we were in a coma after the pudding) over the Flamingo monorail and caught one over to the Sahara where we walked a little bit further to The Strat and caught a cab to the Neon Museum for the Tim Burton Exhibit.

It was enjoyable overall. Having never seen the regular one I can say there were a few Tim Burton easter eggs around but I guess I just expected more. There is a pretty cool dome thing that you go in and there are these teeny tiny displays…I’m not sure how to describe it, but it was pretty cool and I’m glad we did it, but I wouldn’t go again.

I took a crap ton of pictures. I’m only going to post a few here, but I will follow them with a link to all the pictures I took in case you are interested. 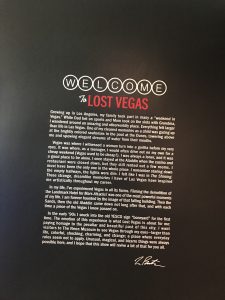 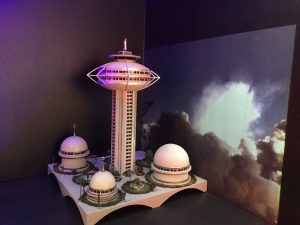 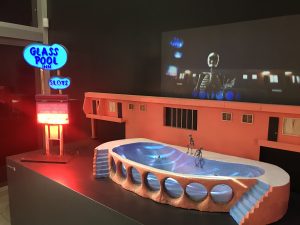 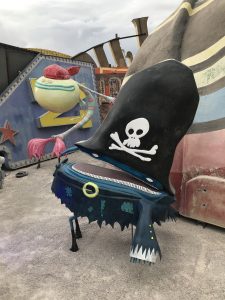 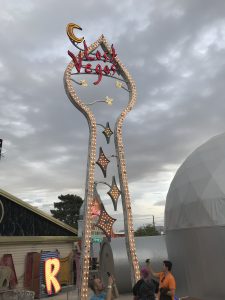 After the Museum we ubered back to Bally’s and chilled in the room for an hour before I ventured downstairs to gamble solo.  I didn’t win anything and lost 40 bucks kinda fast so I came back up to the room after grabbing some chicken tenders and biscuits from Blue Ribbon Fried Chicken. The chicken was juicy but barely breaded and it kinda tasted like the oil wasn’t quite hot enough, but the biscuits were AMAZING!

Wednesday woke us to a drizzly day in Vegas.  It had mostly cleared by that afternoon but you could hear more sirens than usual on the streets from our room and we actually witnessed a truck spinning it’s tires trying to get up the ramp to the parking garage. I forgot how slick the roads can get during the first rain after a long period of none.

Thankfully we didn’t have any plans to drive anywhere that day. Our plans to visit downtown that evening had been pushed back to the next night as our local friend that we were meeting was feeling under the weather and wanted to rest.

We did the Potted Potter matinee around two and it was really fun. Small crowd but the two guys really give it their all and get you into the spirit of things.

I will say that I can see how someone might be disappointed coming out of seeing this play if they went in with high expectations of seeing a Broadway type show. It’s just two guys with a bare bones set and minimal, cheap props but it is really funny and they have tremendous energy. There was room for a fair amount of improv and they were pretty good at it. I love that.

We chilled in the room for the rest of the afternoon before heading back downstairs to play some Twilight Zone Mini- Golf.  The hubs got a groupon for it a while back when we knew we were going to be staying here. We almost forgot about it but as it was raining again, it was the perfect thing for us to do that night. It was a lot of fun and the staff was super chill and had great senses of humor.

Took less than an hour to complete and that was stopping and taking lots of pics. Speaking of that, I once again made a separate album for all the pics I took and will post the link after the few pics I will post here.

After the golf, we stopped for the cheap Asian food from the food court and then I stopped off at the chair massage place so I could get a shoulder massage.

I am a fan of spas and massages but since there is no longer a spa at Bally’s and I was not trying to spend a bunch of money and walk longer than needed just to get my shoulders to calm down since we had a large spa tub in the room, I thought I would give this a shot. It was perfect. I paid 50 bucks for about 35 minutes with tip and I walked away feeling like a million bucks. Like my husband said, it was utilitarian but effective. I didn’t have the ambience of the spa but I got the desired result. 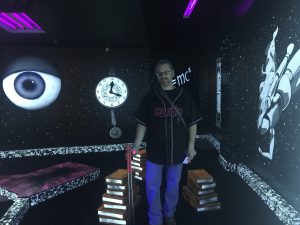 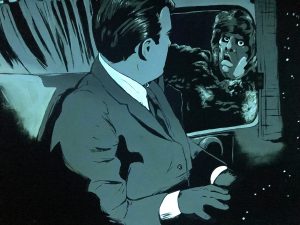 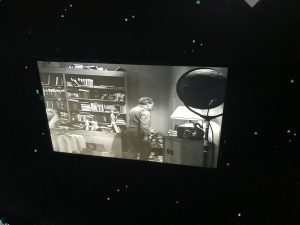