Tales of Withdrawals and Chronic Pain 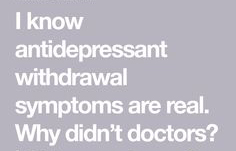 I think that I need to give myself a break. During the first three weeks of a my antidepressant tapers (or in this case my being off them all together) I cannot allow myself to get caught up in anything more than a simple task.
Anything that gets even the slightest bit complicated sparks a raging fury that is followed by helpless tears and I can’t control it once it starts.
I learned this last night when I had to replace my credit card number on all the places I have it stored. Netflix and Hulu were a snap but Itunes was giving me fits. I realize today that I probably need to update to the newest version…whenever it’s outdated it gives me trouble trying to get to the most simple screen.
I ended up changing it on my phone, but not before damn near overturning my desk and everything on it from sheer anger. I wasted way to much time and put myself in a crap of a mood for no good reason. I just needed to walk away.
That is not an easy thing for a person as stubborn as me to do. So I ended up going bed in an upset state, sleeping poorly and having horrible rage filled dreams.
I just need to NOT.
To give myself some time and walk away when things start to get even the slightest bit difficult. It’s not a permanent thing. In a couple of weeks everything should start evening out and I can go back to being hard on myself if I have to.
Not now. Now is the time to practice self care. Time to crawl into bed and pull the covers over my head at 6:30 in the evening if I have to. This is not forever.
This will pass and life will get back to normal again. I just need to take it easy on myself until it does.

On that note, I will probably be journaling more to get this shit off my chest. It isn’t fair to my husband for him to be my only emotional punching bag right?
He’s being amazing. So great that every time he comes back with a supportive comment when I’m a seething bitch I feel horrible and dissolve into tears.
I mean, it would be easier if he was being a dick back…I’d at least feel justified.
I totally don’t mean that by the way.

I guess I should talk about the issues that he is going through right now.
About three or four months ago he started getting these random but pretty severe pains. They would travel from his shoulder for two days to his wrist for another two days to his knee to his elbow to his fingers and so on and so forth.
At first I was convinced it was due to the injectible cholesterol meds that his doc had put him on. He had been on them for a few months but one of the side effects was muscle pain. After much nagging on my part he got permission from his cardiologist to stop them for a couple of months to see. It seemed to get better for a small amount of time and then it got much worse.
When the pain traveled to his wrists and fingers he went to his GP, we suspected carpel tunnel and it was all but confirmed by the doc. He told him to get wrist braces and sent him for blood work.
The wrist braces helped a lot but he was still in a lot of pain and it would still move from one random body part to the other.
The blood work came back and the doc told him that he needed to go see a rheumatoid arthritis specialist and gave him a referral.
It took a week to get a hold of the specialist only to be told that he would have to fill out some forms to see if he would be accepted as a patient.
I’m sorry, what??
How does that even work? If you are in the business of helping people you shouldn’t be able to pick and choose who you help. I get it if your practice is full, but that wasn’t the case.
Three weeks later he was rejected as a patient with no reason given.
It turns out that getting into this kind of specialist in our area is not an easy task. It has been almost three months and he still hasn’t been able to get in to anyone yet. The man is in agony 70% of the time but apparently that isn’t a big deal to anyone by he and I.
He is missing work and when he IS at work he is so far behind on his load because he is in too much pain to get it all done.
He is popping Advil like candy and now I’m working about his stomach lining and kidneys because of it.
The worst part of it is because he can’t get seen, there is no light at the end of the tunnel. He is just in pain all the time and knows that there is no end in sight.
It’s really putting a strain on everything. His patience is gone and I don’t blame him. He’s gotten better, but he can still be quite snappy when his pain is severe. It’s in my nature to want to try and help and it aggravates him when I keep asking if he is okay or how I can help.
It bothers me a lot to see him in pain all the time and know there is nothing I can do at all to make it go away or even alleviate it a little.
I just want to make everything better for him.
I guess that is what he wants to do for me with my withdrawals too.
Our household is a hot mess right now, but we will get through it.
We will celebrate 19 years married and 20 years together on the 26th of this month.
I love that man with everything I have.